Berlin is a fascinating city and the more things change (and they have), the more they stay the same. We’ve designed a Berlin tour just for you that cover all the main sights in Berlin’s historical core.

Get a feel of Berlin then and now with a visit that covers ALL the highlight sites with photo ops in both West and East Berlin. We even break for a delicious traditional German lunch with some of the best beer in Berlin

This is an amazing, personal, and authentic Berlin experience that gives you an inside view of the City's turbulent past and promising future. We pick you up at the ship in Warnemünde or Rostock in a comfortable A/C car, van, or bus.  We’ll whisk you to Berlin in comfort and style.  Your guide, driver, and vehicle will be completely yours for the entire day.

With ship2shore, you’ll walk through the legendary Brandenburg Gate, cross the Death Strip of the Berlin Wall, stand above Hitler’s Bunker, and do an incredible amount more.

Our all-encompassing tour is more than a list of sights, it is a true Berlin experience, where we’ll weave the incredible stories of this city into a comprehensive overview that ranges from Berlin’s origins as a Slavic fishing village, to the splendor of Prussia, the rise of Berlin as the capital of a world-power, the emergence of the Nazis, and Berlin’s post-war rebirth.

We go slow enough and make plenty of stops to take pictures. We can adapt this tour to suit any interest.

Your Berlin Tour will typically include the following sites. 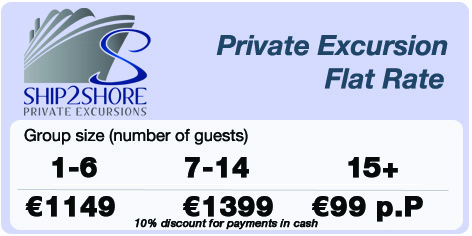